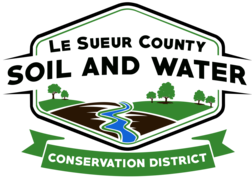 Le Sueur County is located in South Central Minnesota, approximately 60 miles south of the Minneapolis/St. Paul metropolitan area.  The city of Le Center is the County Seat and is where the SWCD is also conveniently located.  Le Sueur County covers an area of 298,880 acres.  The county population is approximately 24,873.

Agriculture and related businesses and industries represent an important element of the county's economy.  Le Sueur County is a major producer of agricultural commodities in Minnesota.  The major crops and livestock species include corn, soybeans, hogs, beef and dairy.  The county also produces significant amounts of  hay, canning crops and small grain.

Le Sueur County is named after the Great French Explorer, Pierre Charles Le Sueur, who traveled up the St Peter's River, now known as the Minnesota River, in the year 1700.

The Le Sueur SWCD began in 1946 for the purpose of assisting landowners wanting to apply practices, on their land, for conservation of soil and water.  These practices are intended to control wind and water erosion, pollution of lakes and streams, and damage to wetlands and wildlife habitats.

The District is organized under the provisions of MN Stat. 103C.  It is governed by a Board of Supervisors composed of 5 members nominated from each County Commissioner District and if elected, serve 4 year terms.